Join us for the Sunshine Home Tour, June 27 – July 18. Come see our seven newest models and celebrate all things fresh and lovely. Details >

The two community pools next to the Daybreak Community Center are now open. The resident pool committee did a great job and the facility is receiving rave community reviews. With the pool project complete, development plans for the adjacent 2/3 acre property, frequently referred to as the Harvest Sun Parcel (HSP), are being finalized and work is slated to begin in the coming months.
Residents may recall that in Spring 2016, the developer proposed and the City approved plans for 15 townhomes on the HSP parcel. Some Daybreak residents expressed concern and a desire to see the parcel used in other more community-oriented ways. Because of this feedback, Daybreak Communities voluntarily agreed to engage the community further about potential alternatives before moving forward with the project.
In March of 2016, two public work sessions open to all Daybreak residents were held as the initial opportunity for stakeholders to learn about the community engagement process and provide comments and feedback on potential land use options for the parcel.
In May of 2016, a resident working group was formed to further explore development options. This committee consisted of Daybreak residents representing multiple villages across the community, and met regularly over a six-month period. Working closely with an independent third party facilitator with representatives of Daybreak Communities in attendance only as content resources, the committee discussed alternative use scenarios for the parcel balancing  community expectations and values with the developer’s desire to obtain a reasonable financial return for their investment in the property, given that the land and infrastructure costs associated with the DCC pools had been donated. Within the process, the resident committee surveyed the Daybreak community twice and evaluated more than a dozen land use options including a park/open space, library, expanded and/or indoor pool, tennis club, conservation garden and a business incubator.
The framework criteria provided to the committee in forming a recommendation to the developer were that the end proposal should “frame” the public square (Callender Square park), that it needed to comply with the requirements of the PC (Planned Community) zone per city codes, and that it needed to provide a reasonable financial return to the land owner. A key consideration that the committee discussed at length was the financial feasibility of each alternative, specifically if the scenario required a land sale to a third party, or if acquired by the HOA, increased HOA fees or a special assessment.  The community surveys conducted by the committee indicated most Daybreak residents were not supportive of additional HOA financial investments or taking on debt obligations to acquire and improve this parcel. Given the community feedback, the committee voted to recommend that residences could be built on the site, however they must be done in a manner that complimented and were compatible with the surrounding neighborhoods and the DCC facilities.
Specific committee recommendations include:

In addition, the committee also requested that the developer inform the residents of land use plans and decisions as the community continues to be developed, particularly in infill areas.
Daybreak Communities implemented all the recommended refinements from the Committee in the final site plans, including a buffer between the residences and pool, lowering the building height from the original plans, reducing the number of units to 11 and expanding parking in the area. The new plan with 11 single and twin homes will be built in 2019. Initial site improvements would take place in the fall of 2018. 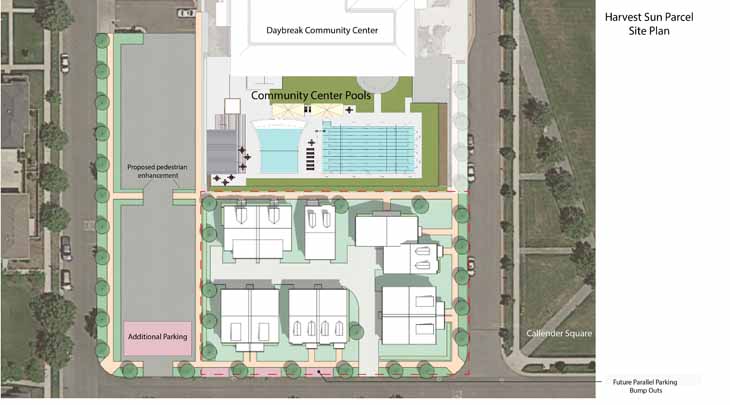 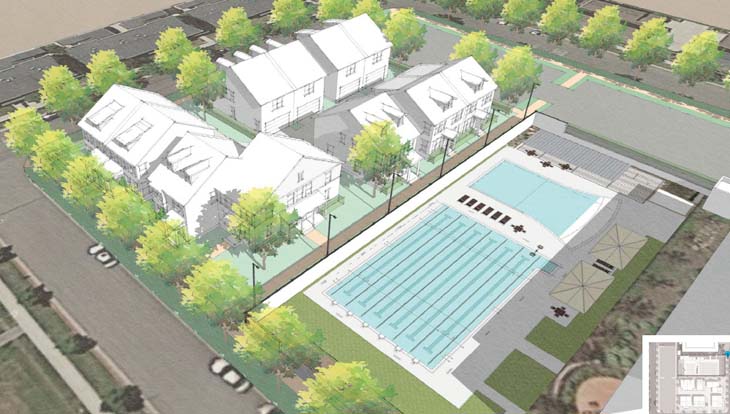