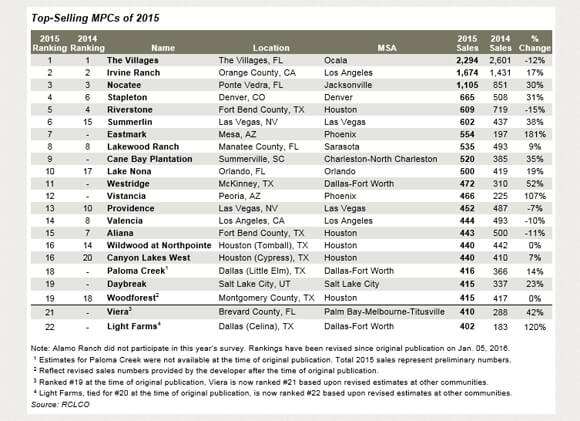 In 2015, 415 homes were sold in Daybreak, which resulted in a 23 percent increase over 2014.
Since the opening 11 years ago, Daybreak has consistently ranked as a top selling new home community which is particularly impressive given that Daybreak is located in a much smaller market than most of the other communities on the list. The mixture of businesses, parks, shops, restaurants, schools, and the variety of housing options sets Daybreak apart from its competitors. This distinction of a smarter, healthier way of thinking about community has helped foster a vibrant community with more than 14,000 residents. Approximately one out of every six new homes sold in the Salt Lake Valley is in Daybreak.  At completion, Daybreak will have approximately 20,000 homes.

Master-planned communities are large-scale developments featuring a range of housing prices and styles, an array of amenities, and multiple non-residential land uses (such as retail, office, hotels, and educational facilities) offering residents an attractive and convenient environment in which to live, work, and play. Some communities provide lifestyle options for multiple market segments, while others target a specific buyer type such as active adults age 55 and over.
John Burns Real Estate Consulting, another leading research firm releases a similar annual report of top selling master planned Communities in which Daybreak was similarly ranked.
Principal Consultant Mollie Carmichael observed that “Daybreak offers four distinct villages with a variety of neighborhoods and lifestyles. Kennecott has completely transformed the South Jordan area with its village concept, lake lifestyle, integrated retail, walkability throughout, and incredible character throughout all of its villages and amenities.  Different neighborhoods or products range from 3-story single family attached with rooftop decks (Yes — Rooftop decks in Utah!) priced from the low $200,000’s to large single-family detached homes in Lakeside Village priced up to the $700,000’s.  The entire master-plan is conveniently located off the area’s TRAX light rail which provides an easier 30 minute commute to Salt Lake City’s downtown employment and cultural events.”
Read the full article from RCLCO, here.