The great thing about fun is it’s just so … fun. So we’re in the process of bringing even more of it to Daybreak. Say hello to Brookside Park & Pool. If you’ve been to the Brookside Model Home Gallery or driven out to the North Trax Station recently you’ve likely seen construction crews hard at work on Daybreak’s next big park.
At 15 acres, Brookside Park will be the second largest in Daybreak. It will include open grassy sports fields, courts for basketball and volleyball, picnic areas and an expansive playground with some really large play structures. (When the kids are bouncing off the walls, just bring them here.) Oh, and for you community gardeners, we’re planning another 50-or-so plots.
Now about that swimming pool. We can’t release a lot of details yet because we’re still working through the finishing touches. But we can say that, as with everything we do in Daybreak, Brookside Pool will be anything but the typical. We’re looking at ways to make it a haven for water-lovers, whether you’re a small splasher or a grownup lapper. We’re tying it into the neighborhood with a tunnel that lets kids safely cross under South Jordan Parkway to get to school, the lake, or anywhere else their feet or bike can take them. And one little hint: the pool will bring special meaning to the name “Brookside.” 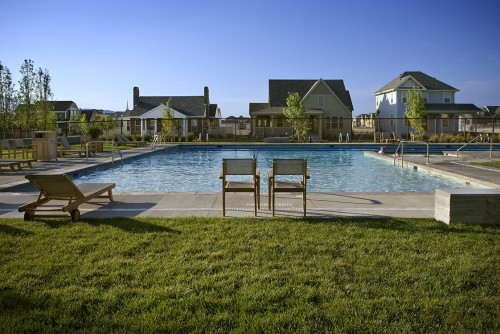 Look for the park to be completed in 2013 with the pool being wrapped up in 2014. If you’d like to see all the goodies that will be included in the park and a few photos of what it might look like, you can download the plan HERE.