Take Back Your Hour!

Learn how living in Daybreak can give you more time.
Sometimes don’t you just wish you had an extra hour in the day? Wouldn’t it be nice to take back an hour and spend it perusing your social circles on-line, or perhaps do a little shopping, or maybe just read for an hour?
Many Daybreak residents have discovered how to make this happen. They’ve taken back their hour! In fact, they’ve taken back many hours.  Their secret?  The transit options available in Daybreak. They allow our neighbors to ride in-style downtown and all over the valley via buses and trains coming in and out all day long in the UTA Daybreak Transit Center.
Instead of the usual morning hurry-up-and-wait, our neighbors let UTA do the commuting while they comfortably sit back and chillax and do their own catching up.

UTA’s new Seimens S70 trains travel at faster speeds than the older trains getting residents downtown or to the University of Utah in less than an hour!  That’s record pace for mass transit. They are also quieter, and provide a better “low floor” entry that’s easier for people with disabilities, moms with strollers, and commuters with bikes to get on and off the train.
More than just time, Daybreak commuters are also saving a pretty big wad of cash. Think about it. How much money would you save if you didn’t have to fill the gas tank for commuter miles?  What if you never had to PAY for parking or even search for a spot? And don’t forget maintenance costs: fewer oil changes, replacement tires, and tune ups. Do the math-in a year, you’d almost have enough saved to pay for a trip to MAUI!  You could even plan that trip on your train ride to work.
With population growth in mind, Daybreak has planned to make traveling to and from home as simple and cost effective as possible.  An ongoing partnership with UTA is just part of the solution.
Did you know that with the completion of 11400 South last year that Daybreak now has TWO direct access flows to I-15?  It’s dramatically reduced rush hour travel times for those who insist on driving themselves to work. 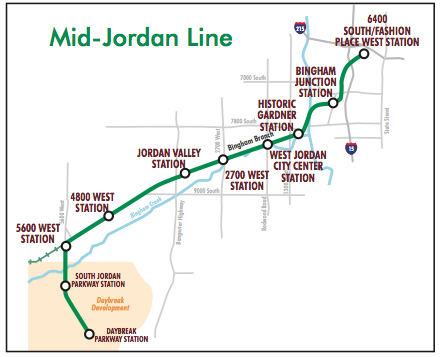 The Mountain View Corridor is also about to open up in Daybreak just West of our shops on Soda Row. It will allow new access in and through Daybreak.
We’re always thinking of and planning for growth that will undoubtedly come over the next few decades.  With a little thought and carefulness, we think Daybreak will be one place in the valley where the only high traffic areas you’ll be worried about are the ones on your carpet.
If you haven’t been to Daybreak lately, hop on a Trax train and come on over.  Take your hour back!
MidJordan_FactSheet_Dec2011