MEDIA RELEASE
Daybreak is consistently ranked as one of the best selling master planned communities in the United States. Real estate advisory firm RCLCO (Robert Charles Lesser & Co., LLC) has conducted a national survey identifying the top-selling master planned communities since 1994. Daybreak has ranked in the Top 20 communities in the survey a total of 7 times since the development was established in 2004. The 2016 edition of the survey was released this week, and Daybreak moved up 4 positions in the overall rankings, from #19 in 2015 to #16 in 2016. Daybreak represents the only recognized community in Utah and one of only two communities in the entire Mountain West. 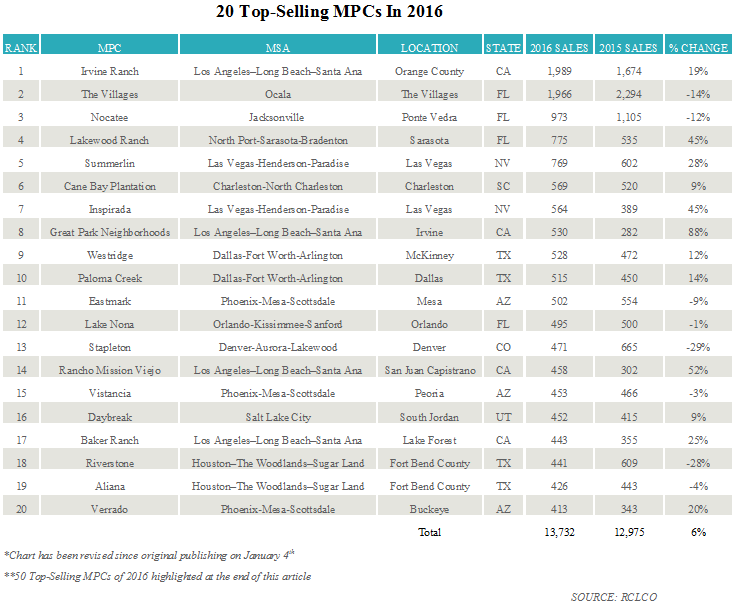 During 2016, 452 new homes were sold in Daybreak, which resulted in a 9 percent increase over 2015.
According to RCLCO, top-selling communities must also offer diverse amenities and multi-generational products including traditional single family homes, townhomes and varied floor plans to include options like multiple master bedrooms.
According to the firms news release “One of the most prevalent features of the top-selling MPCs is the inclusion of mixed-use districts, which tend to be heavily food-oriented and typically include other convenience retail and services supportive of daily living. Another common attribute of the most successful communities is the availability of various healthy community features, including fitness classes, active lifestyle activities, and easily accessible parks and multi-use or dedicated paths and trails that offer a variety of experiences depending upon fitness level, use (biking, walking, running, hiking), and proximity to nature.”

“We’re both excited and honored to once again be counted among some of the most successful communities in the country,” said Ty McCutcheon, CEO of Daybreak Communities, “but more importantly we feel it’s very rewarding to see how so many people continue to respond and vote with their feet when choosing to call Daybreak home.”

The Community currently encompasses nearly 5000 households, 15,000 residents and over 1,000 jobs and will begin working on the first neighborhoods in the “Upper Villages” West of Mountain View Corridor this spring. Daybreak will include up to 20,000 homes when it reaches full buildout sometime in the next decade.
Though located in a much smaller market than most of the other communities of note around the country, Daybreak offers an impressive mixture of businesses, parks, shops, restaurants, schools, and a wide variety of housing options. Daybreak offers four distinct villages with a variety of neighborhoods and lifestyles. Its outdoor-oriented, lake lifestyle with integrated retail and walkability throughout meets the demands of buyers across a wide spectrum of needs. Products range from energy-efficient 3-story townhomes priced from the low $200,000’s to large single-family detached homes in Lakeside Village that top 1 Million dollars. The entire master-plan is conveniently located off the area’s TRAX light rail which provides a stress-free 35 minute commute to Salt Lake City’s downtown employment and cultural events. Approximately one out of every seven new homes sold in the Salt Lake Valley is in Daybreak.
The ranking of 2016’s 50 top-selling communities is based on total home sales as reported by each individual community. RCLCO provides real estate economics and market analysis, strategic planning, management consulting, litigation support, fiscal and economic impact analysis, investment analysis, portfolio structuring, and monitoring services to real estate investors, developers, home builders, financial institutions, and public agencies.
Read the full article from RCLCO, here.