It started with a simple postcard from Daybreak.
Larry and Jill Myler had been perfectly content, living in the Orem home where they had spent the last 30 years. They had raised their kids in that home. They had lots of friends in Orem. Jill’s brother and his family lived just across the street. “We had no plans to move,” says Larry. Then, on a typical June day in 2014, they got a postcard. 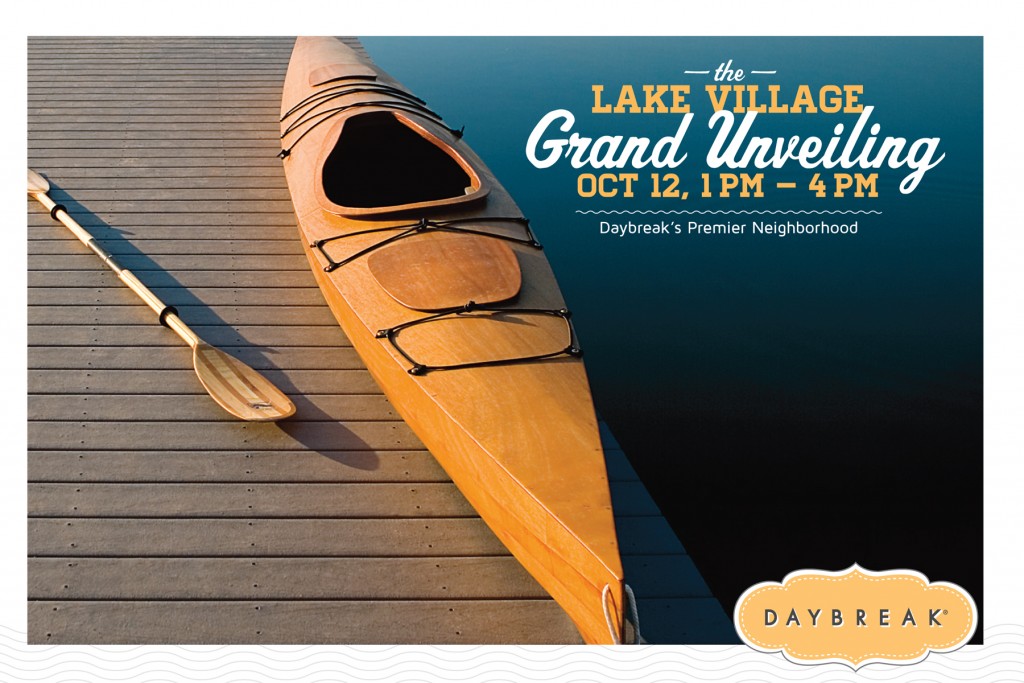 “It didn’t say much,” Jill explains. “It just had a picture of a lake with a pier and a canoe. And it was intriguing because I didn’t know of a place in Utah where you could have something like that. We hadn’t been thinking of moving at all. But I have always loved the idea of living near water.”
Jill wanted to go check out Daybreak and its Lake Village. Larry, not so much: “I said, ‘We’re not moving.’” So Jill employed a classic marital negotiation strategy: “I said, ‘Honey, it will be a cheap date. Let’s just drive out and look around.’”
It took a few weeks of gentle persuasion to get Larry to agree to a visit. But once they arrived in Daybreak, it took only minutes for them to realize that this was something different. Jill says she could sense the thoughtfulness that was behind each element. The homes. The colors. The parks. The way all the details work together. “At first glance, before I even saw the lake, I thought, ‘Wow, this place is beautiful.”
“It turned out to be the most un-cheap date of my life,” Larry says.
Then, in Lake Village, they discovered a home that felt as if it had been designed just for them. A spacious rambler built by Holmes Homes. With tall, tall ceilings. Three bedrooms on the main floor. A hallway lined with built-in bookshelves. The perfect home next to a shimmering lake. And so they drove back to Orem talking about “maybe some day.” 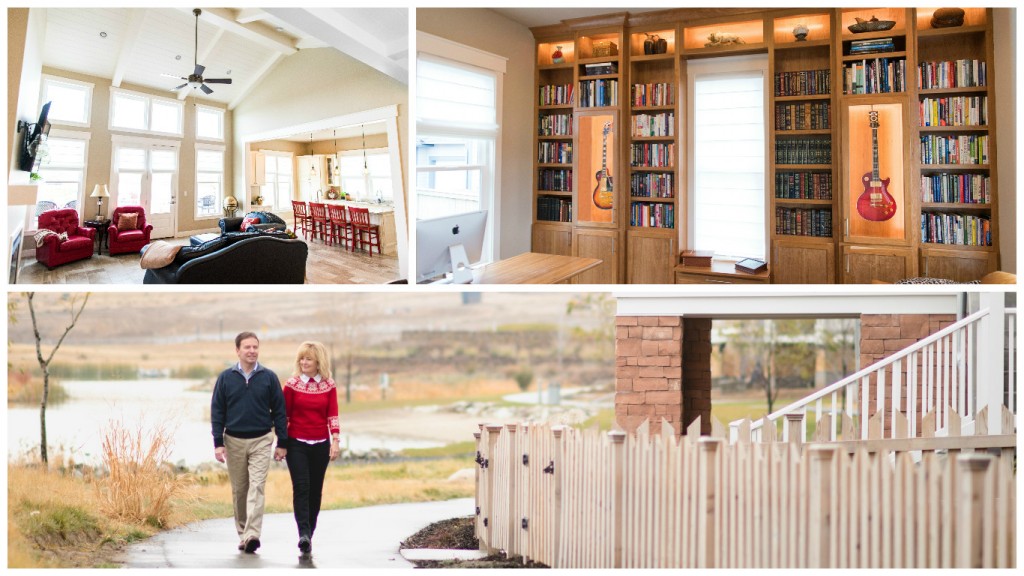 Fast forward to the very next Thursday. Jill had just returned from several days of volunteer work at a youth camp. She hardly had a chance to unpack when Larry hit her with an idea: “Let’s drive to Daybreak and see what it looks like at sunset.” Jill said, no, she’s too tired. Then Larry used a little spousal jiu-jitsu of his own. “Oh, that’s ok,” he said. “I’ll just drive out by myself then.”
Naturally, Jill agreed to go with him. And as they were looking out over the lake, with the sun sinking behind the mountains, Larry told Jill that he had signed a contract with the homebuilder and that they were standing on the site of their new home. “I got a kiss, then a hug, then another hug and maybe a couple more kisses,” Larry says. “I don’t remember exactly. But it was worth it.” 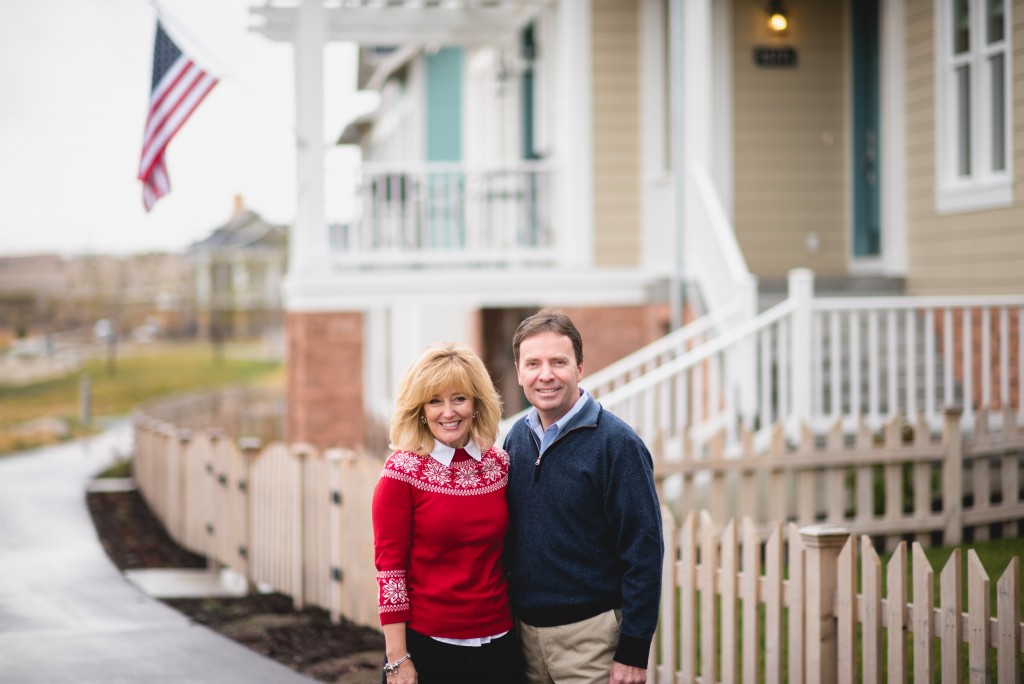 The Mylers have been in their Lake Village home for five months now. They spend hours every week walking or biking around the lake. In the warm months, they paddleboard with the neighbors. Their two grandsons love to visit (Larry calls Daybreak a “grandchild magnet”). The boys hang out at the shore, which is so close that Jill and Larry can easily keep an eye on them from the house. Every once in a while, they head over to SoDa Row for Mexican food or ice cream. “There’s no end to the joy we’re getting out of being here,” Larry says. “I keep thinking that I need to call and get a late checkout so we can stay a little longer. Then I remember that we live here.” 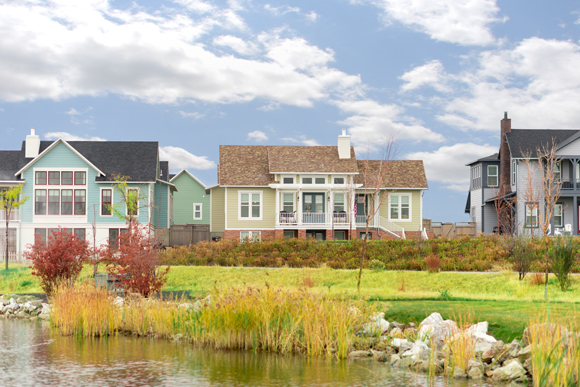 “Now we’re just trying to get all our friends to move here, too,” Jill says. Maybe they should send a postcard.